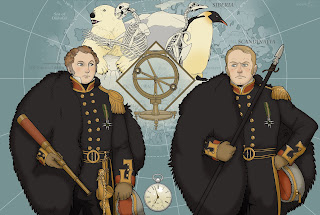 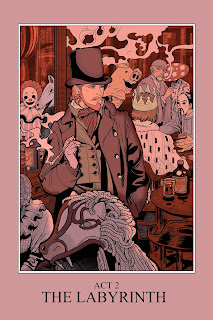 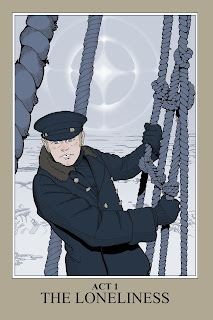 Benjo Act 1: Loneliness Plot Summary: Captain Crozier wakes up on his deserted ship after a sleep as deep as death and sets out to discover what became of his crew,  with the help of his loyal Steward, Mr Jopson . Production Notes: “Loneliness” was taken from the 12th Act of  Franz Schuber ‘s Winterreise. In an earlier version of AMC’s The Terror script Crozier listens to the first act of Winterreise on a punched metal disk, appropriate music to work to and reference. The plot of Benjo act 1 is inspired by the first chapter of The Devine Comedy by  Dante Alighieri. Art references Moebius and  Gustave Dore heavily.
Post a Comment
Read more
February 19, 2021 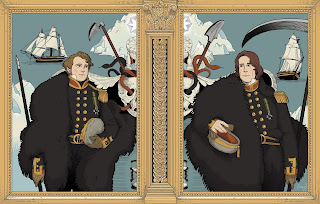 Captains Crozier and Fitzjames in their studies on H.M.S Terror and H.M.S Erebus, accompanied by a verso from 'The Sailor' by   Brzezicki Adamson      Where would we go, To the sand or the snow? Wander in memories or let them all go. Would we be dreamers, helplessly so? Where would we go, where would we go? I will be here forever.   A young Sir Joseph Dalton Hooker during his adventured on H.M.S Erebus; 'journeying further south than any known being', inspired by Palin's 'Erebus, The story of a ship'. Part of the 'Further' character design project. In the style of Junji Ito: A young Thomas Jopson aboard H.M.S Racer, an anti-slavery ship under the command of Captain George Byng at the time.
Post a Comment
Read more
More posts